The Afterword Reading Society: The Harem Midwife by Roberta Rich

Books coverage generally focuses on writers; this is a page about readers. Specifically, it’s about the readers we ask to respond to a new novel each Tuesday. If you’d like to read with us, sign up at theafterword.ca 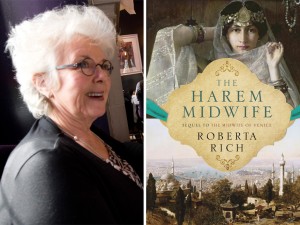 Janet Baldock asks What on earth took you so long to put pen to paper?
Roberta Rich replies I have thought exactly the same thing more times than I can count. Why didn’t I start writing full time in my twenties, damn it?! But the fact is that when I was young, I was going to law school and raising a child, and then running a law practice and that was what I wanted to be doing. I like to reinvent myself about every 20 years and so when I sold my law practice, I decided it was time to pursue my true passion — writing.

The timing of life’s endeavours is something people fuss about a lot. The fact is there is no good time to do anything, from having a baby to starting a business to writing a novel. The best time to do whatever it is that you want to do, is when you feel moved to do it, then hope the world appreciates your efforts. If it doesn’t, then love what you are doing well enough to say, “The hell with the world.”

Doriana Bisegna asks When did you know that Constantinople would become the setting for your second novel? Did you already know this as you were writing your first?
Roberta Rich replies I wrote The Midwife of Venice because I loved the setting and was entranced by the idea of a midwife who had invented an early form of forceps. I had no expectation that my novel would ever be published, let alone that there would be a demand for a sequel.

Kelsey Rolfe asks What drew you to write about this particular time period?
Roberta Rich replies I selected the 16th century rather arbitrarily. I didn’t really know much about Venice period. But I wanted an era when the Ghetto was still thriving. When I read that there had been a particularly devastating plague in 1579 I honed in on that year so that I could incorporate the plague as part of the plot.

Jennifer Camwell asks Animals often appear in the story to heighten foreboding — such as with the doves, cat and rooster. How did you decide on using the hoot of the owl?
Roberta Rich replies During the winter my husband and I live in Colima, the capital of a little agricultural state in Mexico famous for its volcano, lime production and bird life. Nocturnal noises are different here than at home in Vancouver. Most nights a forlorn-sounding little barn owl wakes me up just about the time that the 3:40 a.m. freight train from Manzanillo to Colima rushes through. I lie in bed and listen to both of these sounds and think the world is a pretty good place. But this year, I am dismayed to report, I haven’t heard the owl’s brave hoot. I wonder if he is still alive.

Yoelit Lipinsky asks What inspired you to look at this period of Jewish history?
Roberta Rich replies When I returned from a trip to Venice in 2007, I looked high and low for a historical novel that would give me an idea of what life had been like in the Venetian Ghetto during its heyday. When I couldn’t find such a book, I wrote The Midwife of Venice.

Jane MacLean asks 16th century Constantinople was a mysterious, exotic place. Life in the sultan’s harem was shrouded in secrecy. How did you create such a sumptuous background for the novel?
Roberta Rich replies I love doing research, which is fortunate because you can’t really be a historical novelist without loving to hang around libraries and read everything you can on a subject. Unfortunately, there are no memoirs or diaries left by women of the harem, at least not from the 16th century. There are, however, a number of good secondary sources that give a pretty fair idea of what day-to-day life must have been like.

We asked you: If you could live in any historical time period, when would you choose?

“I would choose the Regency period in England. Of course I would be very, very wealthy and would live in Bath so that I could take the waters, eat fabulous meals and ride around in my carriage dressed in beautiful clothes!” Michele Spak

“Being a woman and ‘of colour,’ I would like to not live in history but live some time in the future. I want opportunities, not drudgery. Catherine Kelly

“I would rather not. Women in Canada now have more freedom than at any other time. No place but here, no time but now!” Barbara Weiler

“Other than today (since we live lives of general ease and comfort), I would choose Paris at the beginning of the 20th century, for its burgeoning art and culture scene.” Reva Kaiser

“It would be difficult to go ‘back’ to another time, however, I think 1900 up to the time of the First World War or The Great Depression would be my choice. The more well-to-do had indoor plumbing, women were gaining more rights and the world was not moving so fast that one couldn’t keep up.” Karen Hewitt

“I would choose to live in Victorian England, because of the conflict of Victorian culture and the rise in technology and the middle class, the rise of the British Empire, the Jack the Ripper murders and Queen Victoria.” Lauren Hummel

“Honestly, none. From the perspective of a female, there is no historical time period that looks even remotely attractive. Women have always been looked upon as inferior, but today less so. I think we are getting there as far as equality goes but we still have a long way to go. A trip back in time is always a step backward.” Janet Baldock

What the Reviewers are Saying