Afterword: Can I have my old bathroom back, please?

Years ago my best friend from high school, Carola Sherry, worked as a go-go dancer in Boston (Cortèges white plastic boots, mini skirt and all) at the Kit Kat Bar, an establishment frequented by building inspectors from city hall, all of whom were on the take and had wads of disposable cash. They were homeboys and would never have dreamed of leaving their ‘hood. In their modest side-by-side duplexes in South Boston they installed gold plated faucets, red-flocked wallpaper, black onyx floors and heated toilet seats. I know this because some of them invited Carola over to take a look.

Soon I am going to be like one of those Boston building inspectors even though at the moment I have no bathroom at all, never mind one with onyx floor and a heated toilet seat. 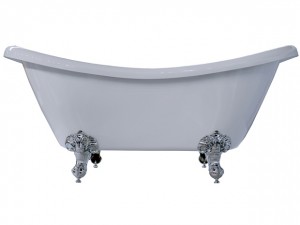 Three months ago my contractor came and ripped out my perfectly serviceable old bathroom with the promise I would have a new one in a month: a magnificent one with marble-topped vanities, a crystal chandelier and a heated mosaic floor. All of this splendour — fit for a Palladio villa on the Brenta Canal, which is where my fourth book just happened to be set — installed in my little wooden house on the Eastside which was originally an Eaton’s kit house and cost $850.

As the tilers, electricians, cutters, painters, drywallers and carpenters came and went, a feeling of self-doubt crept into my heart.

At what point does it all become foolish? At what point does one say, “Okay, I am a nice person, I give to charity. I try not to shout at my husband and run over small animals with my car, but nice as I am, I do not deserve this. I am not a 16th century merchant prince. I had a good bathroom before.” In the dark hours of the night I stand at the doorway and gaze at all the expensive white surfaces, and think, “This is so a violation of the Anti-Sumptuary Laws. I should be arrested.”

My husband grew up in Northern B.C., in a town with the heart-constricting name of Mud River. He was 13 years old before his family had indoor plumbing. In his high school there was a boy who had two bathrooms in his house. My husband puzzled over this for months, wondering what in that world you would do with more than one bathroom. Not such a bad way to grow up. He will love our new bathroom and never feel a nanosecond’s worth of guilt.