A Trial in Venice Prologue

Hannah cupped her hands around her swollen belly. Only the present mattered. Right now, I am alive. I have managed to keep myself and my unborn baby alive for the past two months. I am breathing. I am in pain but my head is still attached to my shoulders. I can feel the child move within me. It is a strong baby, a courageous baby. If it is a boy, he shall be named after Daniel who showed such bravery in the den of lions. If I have a girl she shall be named Esther in memory of Queen Esther who saved the Jews from King Xerxes.

So what if a rat had awoken her by scurrying across her cheek? So what if there was no lid to her waste bucket? So what if she could hear noblemen who had been imprisoned for sodomy or debts, as they ate the fine delicacies they had paid the guards to bring to them? The tinkle of their silver, the rattle of their fine china, the pop of corks being pulled from wine bottles, the smell of their meat. And so what if, closer to hand, came the stench of decaying human flesh wafting from the next cell? 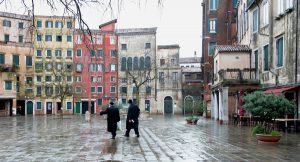 Her aching back, the swelling of ankles and feet, her lower extremities numb from the salt water rushing in from the Lagoon did not overshadow the anguish of losing Matteo. What gave her no peace, made her stomach clench and her mind restless, refusing to light on anything for more than a moment, was that she had failed to protect Matteo. Departing the world without knowing if he was dead or alive ate away at her like a wound that would not heal.

The guard, Guido pressed his narrow, pockmarked face to the bars and cast glances at her swelling belly as Hannah cleaned a wound on her forearm with the clumsiness of pregnancy she had fallen and gashed her arm on a nail by pouring salt water over it, then dabbing at it with the only thing she had―a filthy rag. She bound the gash tightly.

“Close to your confinement, aren’t you?” he asked, pressing his gaunt face, mouth caved in from lack of teeth, to the bars of her cell. The guards, who lived off what they could steal or coax out of their captives, were not much better off than the prisoners. “How long do you reckon till the baby comes and then they hang you?”

Guido was not a bad sort, but she hadn’t the heart to answer. In a couple of months, Hannah would be giving birth to her longed for, precious first child on a pallet of filthy straw surrounded by leering guards and prisoners many of whom had been driven mad by the privations of their captivity. Hannah gambled risking her life, but worse, risking the life of her unborn child and she had lost.